From Wrestling to Hockey and Everything in Between.

Finally, a chance to sit down. Kids are asleep and Jack just turned on the PVR to watch the recorded game. It’s the first game of the season, opening ceremony and all, and while all the families dressed their children in jerseys and initiated them to the game… I forbid Jack to watch the game.

Don’t judge me just yet. You have to imagine a three kid chaos that has reached its daily peak around 7 pm. At that time A1 and A2 are literally wrestling and throwing themselves from the back of the sofa onto each other, while A3’s crawling backwards into the “ring”. I wouldn’t mind any of this if it was done in silence, but silence has gone extinct in this house, along with sleep and sanity.

I can’t have Jack leave me alone during that time and have him standing frozen in front of the TV. Plus after that there’s bath time, pyjamas and bedtime which is a total war zone!

The deal is, he records the game and watches it when they’re all asleep. He can relax, when I can relax. I think that’s a reasonable agreement.

I can feel many male readers thinking that they would never agree to these terms. Well, never say never!

The ceremony just started, the lights, the crowd, the music. I can feel Jack’s body language changing. He loves it. Now I feel bad for delaying it for him…

In my own defense, there’s no way he would’ve enjoyed it this much with that chaos.

I’m looking at his face trying to find a sign of emotion.

Whenever I get emotional watching something, I hold back my tears until he looks at me and asks “are you crying?”, only then do I start crying. Just like whenever A2 gets hurt while playing in the basement, she’ll hold her emotions, slowly climbs up two flights of stairs to find me, and only then will start to cry.

All they want is affection. A hug, a kiss, a whisper. They constantly need to be reminded that they are loved. Just like us women.

Some men think that when they marry a woman, that alone should be enough for her to understand that she is loved. Yup, makes sense… But we need more than that. We need love, tenderness, care and the sooner men will understand the sooner their problems will end.

I’ve realized that showing affection solves most problems in a relationship. Not only with Jack, but it works wonders with the kids during their worst tantrums. Has it ever happened to you to get into a fight with a person you love, and smack in the middle of the fight, get an overwhelming feeling that makes you just want to forget about the whole thing and just hug the person? But we don’t. We hold on to our cause and keep the fight going.

Kids are the same way. So sometimes in the middle of arguments, tantrums or simply them acting up, all they really want is your love. Grab them, and give them a random, long, meaningful hug.

Love is the solution to most problems.

Speaking of anger, I just found out what the final score is going to be. He’s still unaware of what’s coming. I’m going to have to do a lot of damage control.

Btw, my prediction for our Stanley Cup is 2016. 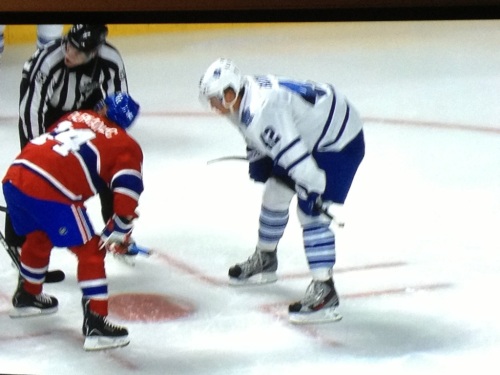